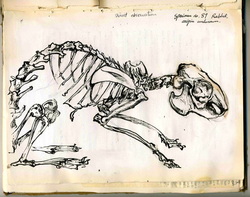 ​I had been stopping my car by the side of the road in this particular spot every morning just as the motley light of day started to push through the mute air of the night. I had been stopping every morning to watch the sunrise over this corpse of a rabbit I had spotted by the kerb, the rabbit the obvious victim of treacherous traffic. Each morning I watched it, it had decomposed just a little more and I would record the changes in my mind. For while at the beginning it was a thing of beauty even in death - its hair, bunny face, sadly deceased, mourning the loss of itself as no one else would - as the days passed and the rain pelted and the hungry teeth of truck tyres bit away pieces of its bunny head, it had begun to transform into a slick, festering mound of unrecognisable, facelessness.

I sat down on the gutter beside the pile of fleshy debris and looked out over the horizon to the sun rising over the tall pine trees and chimneystacks of industry. I tried to make this death meaningful, I wanted to respect that moment and that mound without letting it pass unnoticed, without losing the significant lesson on offer for it was obvious to me that this festering heap was no different to the material of the road, the ground, the air or even of me; It was indeed trying to reconnect with all these things like a rain drop will again become part of the sea, forever destined to return to the place where it had all started. But none of any of this was the actual essence of that one individual rabbit and I wondered where indeed this essence had disappeared to. I did what I always tend to do, I over thought the question. This time my over thinking had a consequence that I had not experienced before in that my mind fell out. My mind fell out of my head and rolled out into the fields beyond me like a large ball of string unwinding - some trail for Hansel and Gretel to later follow back from the dark. I was frozen, possibly stung by the shock of my head being emptied of my mind and as I sat frozen I thought to myself in a rather vacant manner ‘It will take me an eternity to retrieve all that’ and my body felt heavy with lethargy at the thought of moving toward the untied shoe laces of my mind and winding them all up again like again the cast-away cables of a mooring ship. The weight of it seemed to me so great. But it was soon evident that an eternity to consider it was something I didn’t have.

Just as I was having this mindless thought people began to run out into the field and collect the stringy fabric of my mind as if picking up a lost cargo of fruit fallen from the gaping rear of some passing lorry. The people jumped jubilant off the back of their truck which resembled the rickety wooden boat their parents had once illegally set sail in and before I knew it, a great deal of my mind had been swept up and carted off by eager bargain hunters and thieves, to market or their own homes I could not be sure. They sped away pleased at their day's gatherings as they were the hunters and they were the thieves.

There sat I with my corpse and the rotting remains of what once was a rabbit. There I sat frozen in thought when it occurred to me that I did not need my mind to think at all. Here I was, mindless yet still mindful because my awareness was not a product of my mind it came from my heart and breathed in my soul. I began to realise where the essence of that one rabbit had gone. I looked down to the ground beside me and saw how quickly time evaporates when we get lost in our thoughts – all that was left of the rabbit now was a small pile of sun bleach bones and a little rabbit skull; The essence of the rabbit seemed to have returned to it when it’s bones were revealed and there was no more layers to conceal it. I got up and slowly walked through the field collecting the few stringy remains of my mind and endeavoured to return to the confines of my home – the word and the act seeming more and more redundant. Over the years that followed and many have passed on now; I would often come across those fabrics and strands of my mind that had been stolen by immigrants and thieves in the field that day. I’d find them at market stalls down town by the fish and incense, in the immigrant alleys and pawn shops and sometimes, I’d even buy back a certain piece if it was a thread I had once been fond of but over all I am lighter now and find thinking without the tangled web of the matter of my mind like a quiet stroll by the calm morning sea. I felt a rain drop touch my arm and looked down on the white surface of my living flesh to see the little bubble of water resting. I smiled at it respectfully thinking what a long way it had come only to return to the start again. I lent over the ledge of wall that kept my feet out of the water and carefully tilted my limb until the raindrop fell those last couple of feet, another cycle complete.
Powered by